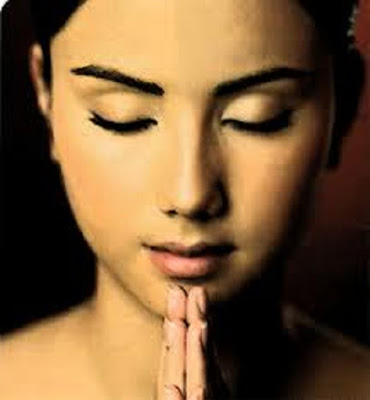 Learn Thai
Many European find it difficult to learn and communicate successfully in Thai because it is based on a totally different grammar structure, has a large alphabet, it's intonation, is very contextual and is greatly affected by body language.

Thai Language
The Thai Language derives from the ancient languages of Asia and takes a lot of input from the 2 great cultures of the region, China and India. Although the direct line of the language is from India subcontinent, namely it's Sanskrit based script, the way it is used and spoken has many classic features of the Chinese way of life.

Learning Thai for westerners in a formal setting

Thai Grammar
Thai grammar is based more on simpler ideas than the European languages. It doesn't need to pin point exactly who did what to whom. The language is more than happy with inference and vagueness not accepted in Europe. As seen by a Thai mind, exactness is all too often for people who are too serious, those who carry the weight of the world on their shoulders.

Examples of where the Thai language and communicating are not too exact;
Thai alphabet
Also the Thai written language has a large alphabet with 48 characters with 25 vowels. Vowels can be partly explained by understanding that in English, the a vowel is pronounced differently if it sits next to another vowel ie; ''ae, ao, au, ai,' etc. 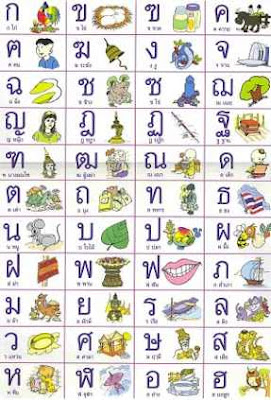 Learning Thai at School
Thai alphabet and language is learnt by rote in school when children are about 4 or 5 . Learning is done with a lot of repetition based on saying the letters of the alphabet. Each letter is sounded out by saying the list of traditional objects, many of which are non existent in today's society. Gourds and Temple paraphernalia are no longer part of the 2012 world for the majority but by repeating these symbols Thai people are united in the traditions of their own customs and culture.

Thai Numbers
Traditional Thai numbers, are written down as in the first column on the first row below. You can see these numbers on all bank notes and all key documents, like land papers. However, following world conventions and for the sake of speed of writing, western numbers are used in shops and in accounting and are understood by everybody. Yet again Thai culture embraces its history and customs and religiously teaches the Sanskrit numbers to all children from an early age.

Thai Intonation
On top of all of this, the Thai language has a very specific intonation where the romanized pronunciation of ma can be 'dog', 'mother' or 'come here' depending on how the word is stressed and the inflection is used. 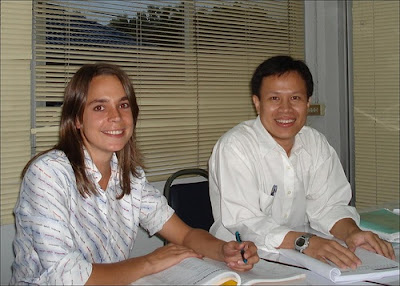 Getting to grips with the Thai language... especially those idioms

Thai Idioms.
'Taan Khao laew?' can be translated as have you eaten? It is often used as a greeting rather than the formal Sawadee Krup/ Ka (hello or goodbye). Likewise another greeting in the local southern dialect 'Bai Nai Puern?' means hello but translates as where are you going?

These are examples of local idioms which are easy enough to pick up and give a rich depth to the Thai language as they define what is important to the Thai nation and how it's language has reached where it is now. Thai language has not been put upon by modernisation to simplify it's way of communicating and so this lovely way of life is full of idioms, full of character and nuance.

Hierarchy, Thai Face and language.
From the moment a baby is born, the mothers aunts and friends will talk to the newborn from a position in the Thai Hierarchy. Elders and children of a higher social standing will be respected and afforded a more deferential spoken language. Twins will be talked to and taught to address each other as older brother/ sister XXXX or younger brother/ sister YYYY and this will stay with them for the rest of their life.

My father, on visiting my wife's family, was asked by an uncle how old he was. This totally threw him. The last time anyone had asked him his age socially was decades earlier in his life. However the Thai uncle wanted to get the right tone in his language to speak to my father so as not to upset the natural hierarchy in the family and preserve or keep Thai Face. 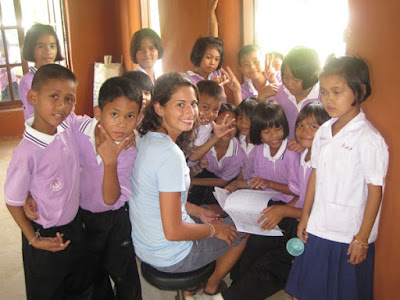 Mistakes by linguists.
Many fine linguists who can normally learn a language in 6 months make huge head way as they have the ability to remember phrases and lists of words. As commented above, the grammar is not as taxing as say English, so the perception is that this great linguist has made significant progress.

All too often I have seen these people get into trouble in Thailand as they translate European thoughts and mannerisms into Thai. The result is they have totally missed the presumed hierarchy in the language and blunder away in a Thai translation (grammatically correct) but appearing too bold or forceful in the wrong occasion. Often you will hear a common put down.. the foreigner knows too much. The foreigner has learnt how to translate but not how to communicate and or get things done in Thailand.

Body Language in Thailand
The simple truth is that you outward appearance , demeanor and composure, your surface face is a key to communicating in Thailand and a language all in itself. The famous Thai Smile says so much about the way language works. Thai people love to communicate with like minded souls and a happy, giving and flexible demeanour can show in ones face, a gesture and a polite use of language and will always find a way though. Coversely, all the great language skills in the world seem to get you nowhere if you are tired, grumpy and or pushy.

Thailand is a country of great intrigue, joy and happiness and you either play by it's language rules or don't play at all.
Posted by pdr123 at 12:15 AM